How to set up an AT-LP140XP turntable? Print

Proper set up of the AT-LP140XP turntable will ensure that it will perform to its full potential. Please follow the steps below. Do not install the dust cover or connect the AC power adaptor until assembly is complete.

Carefully remove the turntable from the package and verify that all parts and accessories are present. You should have the following items:

Setting up the Turntable

Position the turntable on a level surface. If the surface is not level, the turntable may be levelled by adjusting the feet on the turntable. The feet thread into the bottom of the turntable chassis and are screwed all the way in for shipping purposes. With the aid of a bubble level (sold separately) adjust the feet as needed to level the turntable. Raise the height of one or more corners by supporting the weight of that corner of the turntable with one hand while unscrewing the foot in a clockwise direction with the other hand.

To avoid the effects of vibrations and acoustic sound pressure, do not position the turntable on top of or near any loudspeakers.

Carefully place the aluminium record platter on the turntable’s centre spindle, making sure it fully seats on the spindle. Place the felt record mat on the platter.

Remove the twist tie and temporarily secure the tonearm to its rest with the locking clamp.

Caution: Do not drag the cartridge’s stylus across the platter or record mat while adjusting the tonearm’s balance or setting the tracking force. Doing so may damage the stylus assembly!

Remove the cartridge’s clear plastic stylus protector by pulling it straight off the front of the cartridge. Try not to pull down on the protector, doing so may dislodge the stylus assembly from the cartridge body.

Set the anti-skate adjustment to the same value as the tracking force, 3.0.

The AT-LP140XP turntable provides a traditional unequalised PHONO level output. This makes it compatible with the PHONO input jacks found on many stereo amplifiers, stereo receivers and DJ mixers. A 1.4 m (4.6′) dual RCA audio cable with an integrated ground wire is provided for making the connection. The RCA cable’s red plug is the right (R) channel, and the white plug is the left (L) channel. For connection to devices that do not have PHONO input jacks on them, the installation of a separate phono pre-amplifier between the turntable and the device will be required.

If your device has PHONO input jacks on it, simply connect the turntable to the jacks using the provided dual RCA audio cable. Attach the audio cables integrated ground wire to the ground lug on the device. 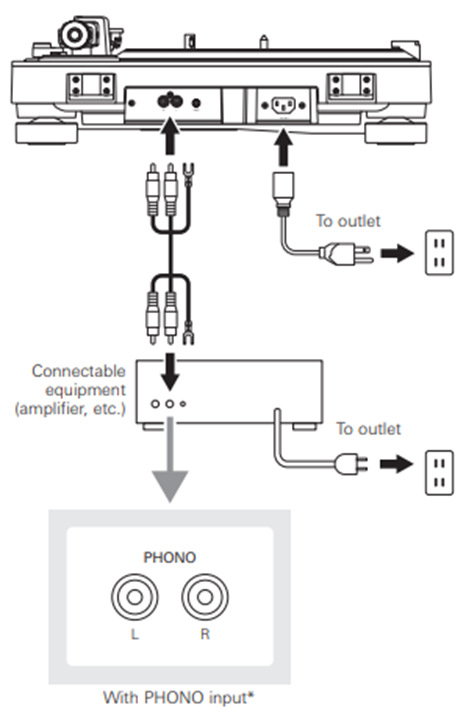 Connecting to AUX, AUDIO IN or other LINE level jacks

Connect to power and install the dust cover

After the audio connection is made, attach the included AC power cord to the AC power inlet on the rear of the turntable, then connect the opposite end of the cord to a convenient AC power outlet. Retrieve the dust cover and install on the hinges.

The entire setup process may be viewed in the following video.

If you have any questions, or need further assistance setting up the AT-LP140XP turntable feel free to open up a ticket with out European technical support team using the link at the top of the page.