How to set up an AT-LPW40WN turntable Print

Proper set up of the AT-LPW40WN turntable will ensure that it can perform at its full potential. Please follow the steps below. Do not install the dust cover yet.

Carefully remove the turntable from the package and verify that all parts and accessories are present.

You should have the following items:

Setting up the turntable

Place the turntable chassis on a firm, level surface. If the surface is not level, the turntable may be levelled by adjusting the feet on the turntable. Straight out the box, the feet are thread into the bottom of the chassis and screwed all the way in (putting the turntable at its lowest possible height). With the aid of a bubble level, such as our AT615a Turntable Level (sold separately), adjust the feet as needed to level the turntable. Raise the height of one or more corners by supporting the weight of that corner with one hand while unscrewing the foot in a clockwise direction with the other hand.

Install the platter and drive belt

A rubber drive belt comes preinstalled on the record platter. A red ribbon inserted between the belt and the platter drive rim is used as an aid to place the belt around the brass motor pulley.

Finally, place the rubber record mat on the platter.

Remove the twist tie and foam wrap used to protect the tonearm during shipment, then secure the arm to its rest with the locking clamp. Attach the headshell/cartridge assembly by inserting it into the socket at the end of the tonearm. While holding the headshell in position, rotate the headshell locking ring counterclockwise (to the left). As the ring rotates, it pulls the headshell into its seated position. Hand tighten the ring until it is snug. 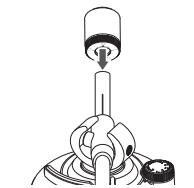 CAUTION: Do not drag the cartridge’s stylus across the platter or record mat while adjusting the tonearm’s balance or setting the tracking force. Doing so may damage the stylus assembly!

Carefully remove the stylus protective cover by sliding it straight forward off the front of the cartridge, exposing the stylus. Try not to pull down on the protector, doing so may dislodge the stylus assembly from the cartridge body.

While gently holding the sides of the headshell to stabilize the tonearm, release the tonearm locking clamp to allow the tonearm to swing freely. Continue to hold the tonearm while rotating the counterweight in the direction needed to balance the arm in the horizontal plane. Check for balance by temporarily releasing your grip on the headshell after each adjustment of the weight. Ultimately, the arm should float freely just above the tonearm rest – not touch the rest. A properly balanced tonearm will float parallel to the turntable chassis. Once the arm is balanced, place it into the armrest and secure it using the locking clamp. Be careful not to rotate the counterweight while doing this.

Set the anti-skate adjustment to the same value as the tracking force. For the AT-VM95C, this is 2.0. 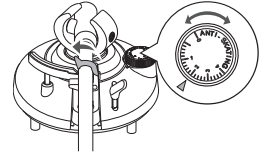 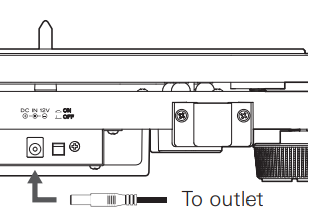 Next, connect the provided dual RCA audio cable to the left and right output connectors on the turntable. The RCA cable’s red plug is the right (R) channel and the white plug is the left (L) channel. The turntable can provide either a traditional unequalized PHONO level output or an equalized LINE level output making it compatible with a variety of devices, including those with or without a dedicated PHONO input for a turntable. 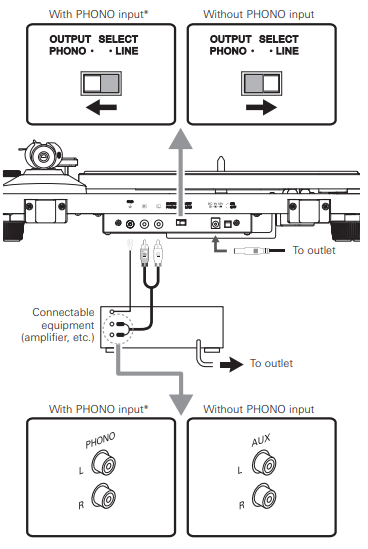 Connecting to AUX, AUDIO IN, or other LINE level input jacks

If your device does not have PHONO-type input jacks, the turntable may be connected to other types of inputs such as AUX, AUDIO IN, LINE, CD etc. Set the “PHONO-LINE” selector switch located on the rear of the turntable to LINE, which turns on the turntable’s internal preamplifier. Note that if the switch is set to PHONO when connected to these type of inputs, you may have little to no sound. When the preamp selector switch is set to LINE, the ground wire connection is not required. See the Without PHONO input illustration above.